What will the world look like in 2040? No apocalyptic climate disasters, but an inspiring and hopeful picture of the future, as well as the way to achieve this goal. "2040" is a motivational chain of very practical solutions that already exist and can save the world if we really commit ourselves. An inspiring "yes we can" film with a focus on the power of innovation and creativity. 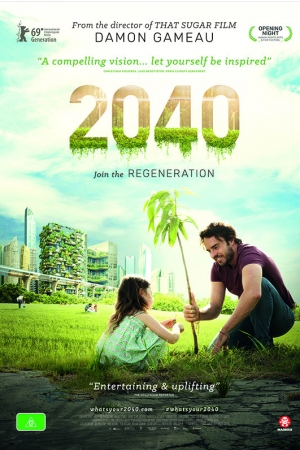 In 2040, the daughter of director Damon Gameau (That Sugar Film) will be 21. What will her world look like? Can it be saved in the light of current climate issues? Gameau searched and found a lot of inspiring solutions that are already available. We simply have to make them known and apply them on a larger scale. With its "fact-based dreaming", Gameau stays far away from the often alarming and overwhelming documentaries about climate problems. "2040" is an exercise in "big thinking to tackle big problems." Designed as a visual letter to his 4-year-old daughter, Gameau combines classic documentary images with dramatized scenes and impressive visual effects. The result is a beautiful "vision board" for our planet. A wonderful and inspiring film: you will walk away not only with renewed hope, but with a big dose of enthusiasm to participate in this optimistic world vision.