How do you make a sequel to what is widely regarded as one of the very best concert films ever made? In 1984 Stop Making Sense brought a thrilling immersion into the quirky musical universe of Talking Heads at the height of their fame. 35 years later, frontman David Byrne engaged none other than Spike Lee to direct a new, fantastically choreographed concert film. A concert that you should not only hear, but mostly see, preferably on a big screen and in the best conditions. An unmissable rollercoaster of visual and musical delights. 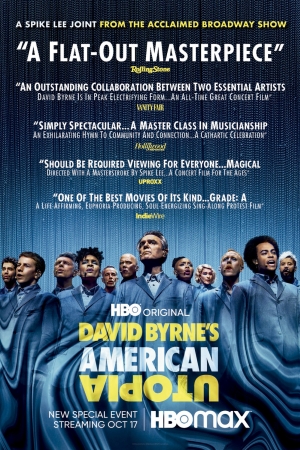 Just like in the legendary 1984 concert film Stop Making Sense, the opening shot is Byrne on stage all by himself. The man has not lost an ounce of charisma. And clearly, in addition to a unique musical talent, he has a cinematic spirit. American Utopia is not only a musical masterpiece, but stands out thanks to its downright inspiring visual set-up. Enhanced by Spike Lee's sharp yet intimate direction, Byrne brings an unparalleled set list of songs that tell a story and are beautifully choreographed into a brilliant Broadway show. The story being told is that of the need for connection between people, in all its forms. Humanity, processed in a roller coaster of visual and musical delights.