Which laws are the most important? State laws or moral rules? The figure of Antigone has, since ancient times, represented the moral resistance of the individual against the unshakable state apparatus that does not participate in ethics. This documentary combines images of recent political events with Žižek's very own way of thinking. Is today's Antigone personified by the populist, anti-migration politicians, or by those who oppose them? Who plays which role in the "Greek tragedy" that we are currently undergoing? 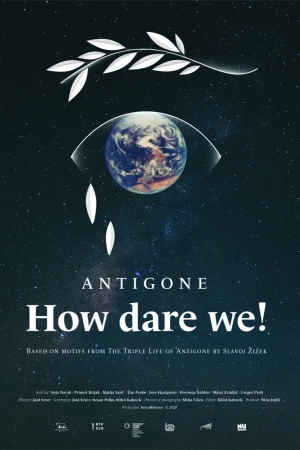 Since ancient times, the figure of Antigone has stood for the contradiction between moral rules on the one hand and state laws on the other. She personified the worthy moral resistance of the individual against the state apparatus that abuses its power. In his book The Triple Life of Antigone, philosopher Slavoj Žižek made a comment on this classical view in his own unique way and links Antigone's themes to contemporary social problems and tendencies. He did this by rewriting Sophocles' tragedy, with three different variations on the story. Is Antigone's protest as pure as we think? What if King Creon, whom she rebels against, actually has a good point? The documentary in turn combines the three possible endings of Žižek's book with images from European history, political speeches and propaganda and a conversation with Slavoj Žižek himself. Is contemporary Antigone personified by the populist, anti-migration politicians, or by those who oppose them? Should we give the highest priority to respect for state laws? Or is there room for a system of moral laws?

The screening on 26.03 is followed by a Q&A with the director.