In an intoxicating mix of documentary and fiction, Bloody Nose, Empty Pockets plunges into the fascinating universe of an old-fashioned pub in Las Vegas. A gripping glimpse into a tragicomic retreat for lost souls, where a drink offers them a rewarding distraction or pushes them further off the rails. This compelling portrait of a world full of colorful characters was tipped by Rolling Stone as one of the top 10 Sundance films. 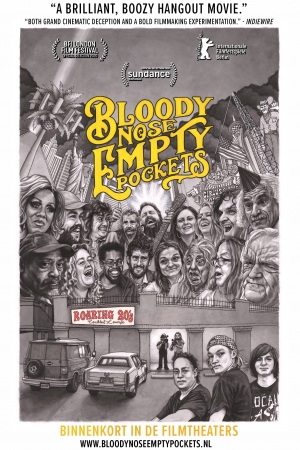 In the Roaring 20s, a bar on the outskirts of Las Vegas, it is never fully day or night. It is the home of Michael, a downcast actor who cleans the cafe after closing time. Tomorrow, the bar will close its doors for good. During the last 24 hours that it is open, guests trickle in one by one. As the evening progresses and the alcohol flows freely, the stories emerge. Sincere testimonies of disappointment and loss, but also of love and friendship. Drunken outpourings, declarations of love or blame. A wonderful ode to the connection and comfort that can be found in a dingy bar.