After the Boom comes the Bust, economic prosperity is always followed by a crisis. But why is that? Recently deceased Monty Python comedian Terry Jones guides us through the history and essence of the economic "boom-bust cycle" using interviews, animations and puppet shows. 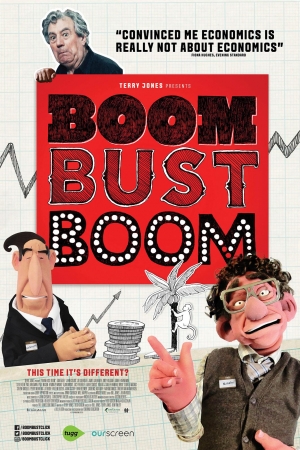 At the beginning of the year, comedian Terry Jones passed away. He was one of the legendary members of the Monty Python group, known for The Holy Grail, Life of Brian and The Meaning of Life, among many others productions. After meeting Dutch econometrist Theo Kocken, Jones decided to make a film about the relationship between economic crises and the role of human behavior in euphoric times. People are not rational, sometimes they are even collectively irrational. Euphoria in the market leads to instability and ultimately to a bust. Among others, Daniel Kahneman, the psychologist who received a Nobel Prize for economy, pops up to explain why economic crashes continue to happen. Only through better insight into typical human fallacies can we avoid this in the future. Despite the heavy topic, Boom Bust Boom is an instructive, understandable and funny documentary with - what did you expect - a fair amount of Monty Python-like humor.