27 dead and 184 injured, that is the sad toll after a fire in a nightclub. Unfortunately, this is only the beginning. Dozens of injured victims die later in the hospital from perfectly preventable infections. It is the start of a corruption case that will lead to the dismissal of the Romanian government. Leave it to a sports newspaper, of all media, to bring attention to the story. 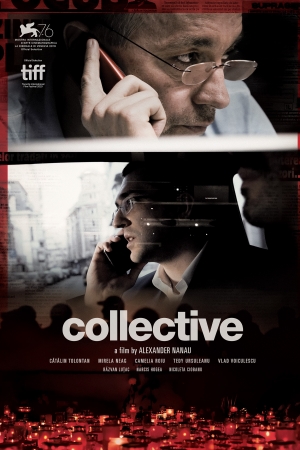 A huge fire at "Colectiv" nightclub in Bucharest claims many casualties. 27 people died in the fire, but many more succumbed to their burns in the hospital. A few journalists are dumbfounded and want to find out what is going on. Were the hospitals insufficiently equipped? All traces lead to the pharmaceutical company that supplies the disinfectant. When the journalists dig deeper, more and more people appear to be involved. Nanau captures the investigations, listens to the victims and, through the new Minister of Health, also manages to give insight into the political consequences of the drama. Collective tells a universal story about the omnipresence of abuse of power and how journalism is often a long-term process.