Leuven during the Second World War. A fascinating story of conquest, occupation and liberation, built entirely from a surprising large amount of archive material. The images bring the concrete story of the city of Leuven to life in the wider context of WWII. Voiced by former inhabitant of Leuven, musician Daan Stuyven. 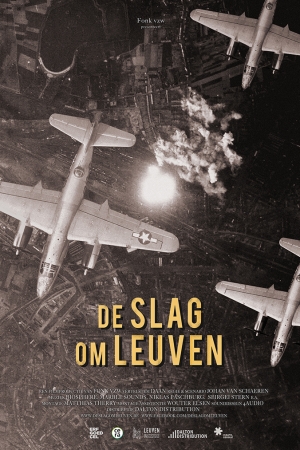 Unique footage that deserves a large screen. The focus is on Leuven, but at the same time the film sketches the broader story of WWII in Europe, from the Blitzkrieg in 1939 to Germany’s defeat in 1945. The events that took place in Leuven are placed in a clear context. The unique visual material of Leuven and the surrounding area, selected from countless national and international film archives, ensures that the war comes surprisingly close.

Sat 28.03 (17u30), the film will be screened once in a by AI-colorised version with the open source software DeOldify.
The screening of 29.03 will be followed by an extended Q&A with Ernst Josef Rothschild, formally Jewish inhabitant of Leuven and deported in 1944