Cute baby Sama looks straight into the camera when we hear a loud bang in the background. She is the daughter of a young journalist who records their daily life in Syria for five years, a life threatened by the bitter reality of war. For Sama shows the Syrian tragedy from within. A radically empathetic film, in which love beats the devastating power of war. Searing, unforgettable and intensely moving. Nominated for an Oscar and rightly so. 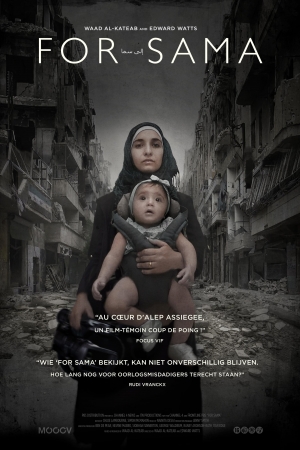 Waad Al-Kateab is a journalist, but she is also a young woman who, like many others, falls in love, gets married and has a child. Her husband Hamza works as a doctor in a hospital set up and improvised by him. The toll the war takes is painfully visible. The danger of the devastating conflict is getting closer, as even the hospital becomes the target of another bombing raid. Doubt strikes: should they flee to ensure their own safety, or stay with their friends and not give in to the horror that the armed forces are causing? Although For Sama is primarily a story of love, a visual letter from a mother to her daughter, the film maker's question lingers for a long time: why is the world allowing this to happen?