Four Seasons in a DayAnnabel Verbeke

Every day the Carlingford ferry takes people back and forth between Northern Ireland and Ireland. The border hides deep in the sea, invisible to the people on the boat. During the short voyage across the high seas, various stories, thoughts and musings emerge. A kaleidoscopic story based on how an imaginary line is reflected in people's everyday life and thoughts. 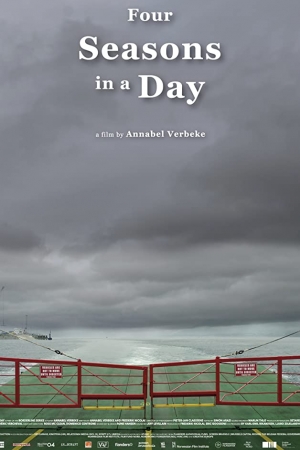 At the northeastern tip of Ireland, the border between the Republic of Ireland and the United Kingdom cuts through the glacial fjord Carlingford Lough. The Carlingford Ferry crosses the strait daily, taking people from one side to the other. We meet different characters from North and South, each with their own ideas, who make this restful journey through the beautiful, green Irish countryside. The short journey breaks the bustle of the day and provokes moments of inner reflection as they cross the invisible border, hidden in the water. The film explores the concept of identity and community on an island divided not by one, but by two borders: a physical border between the United Kingdom and Ireland, and a mental border between seemingly incompatible opinions about the role and meaning of the border. Opinions that often tend to change when personal factors transcend ideological ones. The water between the two sides may be very deep, but they have unpredictable weather in common. Does the local expression "4 seasons in one day" refer only to the weather?

Is followed by a Q&A with the director.