Hatidze lives with her bedridden mother in a remote mountain village in northern Macedonia. She is one of the last female wild bee hunters and lives by the golden rule: never take more from the bees than you need. This harmony is disturbed when Hussein and his noisy family settle down in the village. Honeyland is a loving but ominous fable about the fragile relationship between man and nature. 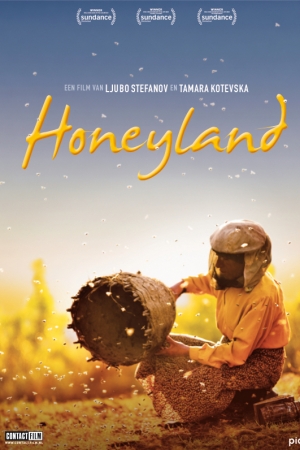 Macedonian director duo Tamara Kotevska and Ljubomir Stefanov met Hatidze by coincidence, while she was softly singing to her bees. The scene fascinated them so much that they decided to follow her. They ended up staying with her for almost three years and witnessed the arrival of Hussein and his family. They are the opposite of Hatidze in everything. They are rough and inconsiderate, in how they act around each other but also and especially in their dealings with nature. When Hussein, driven by profit, engages in wild beekeeping, things take a turn. The dramatic story that unfolds before the camera is almost fictional. Plunder nature for quick profit or treat it with love and reap the benefits for years. The Honeyland story captures a dilemma that should concern the entire world.