What were you doing on July 25, 2020? More than 320,000 people around the world recorded their day in a video diary. Oscar winner Kevin Macdonald transformed this immense wealth of visual material into a mosaic tale of a day in the life on earth. Different vignettes about daily life, funny, sad, banal or exceptional. A film about ordinary things, but also about lockdowns, inequality and poverty. About love and loss. About life itself. 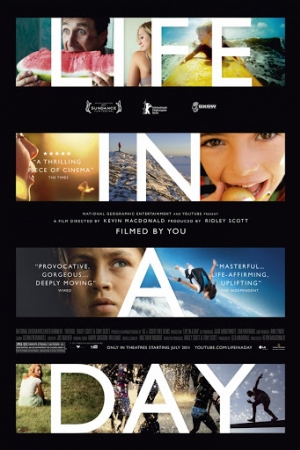 Ten years ago, acclaimed documentary maker Kevin Macdonald made a similar project after a YouTube call to record your life on July 24, 2010, for which he received 80,000 submissions. Now, ten years later, he was sent more than 320,000, from 192 countries and in more than 65 languages. Together with Ridley Scott (The Martian, Black Hawk Down, Gladiator) acting as producer, all of this footage was turned into a time capsule full of snapshots. One man proposes in a beautiful location but is rejected, someone else names all the spiders in his apartment out of lockdown boredom, a young boy looks passionately at different types of trains and a young woman breaks up with her boyfriend. Only one character from the previous 2010 film is indirectly featured in this kaleidoscopic collection of snapshots. A roller coaster through life, with stops in India, the US, Brazil, Russia, Mexico and Japan, with ups full of happiness, joy and whimsy, but also downs full of tragedy and adversity.