New Pigs on the BlockJimmy Kets

Luc, Mia and Anja are three pigs who are part of a social neighborhood project. On a small piece of no man's land they process the food surpluses from the neighborhood. A noble initiative that starts out for the pigs as a bit of heaven on earth. But as the seasons progress, the fairy tale becomes more and more grim. The camera brings us up to eye level with Luc, Mia and Anja and also observes human beings alongside them. 'New Pigs on the Block' is a tenderly confrontational film that shows the ambiguous relationship between humans and animals in an unseen way. 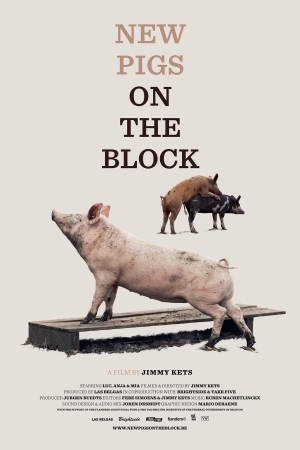 Luc, Mia and Anja are three pigs who play the leading role in a neighborhood project in Ghent. On a small vacant piece of no man's land next to the railway, fenced off with an electric fence, a pigsty was erected. The pigs are responsible for the waste management of the neighborhood: families, shops and restaurants drop their leftovers there. The pigs could really bring the neighborhood closer together. A noble initiative that starts out for the pigs as a piece of heaven on earth. But gradually the fairy tale gets grim. For four months director Jimmy Kets lived together with Luc, Mia and Anja. He filmed the story through their eyes and saw how the relationship between the pigs deteriorated and how their trust in humans slowly faded. Together with them, New Pigs on the Block makes us look at people in a different way. New Pigs on the Block is a tender confrontational film that portrays the ambiguous relationship between humans and animals in an unprecedented way.

The screening of 26.03 is followed by a Q&A with the director.