1983. An empty stage. David Byrne, the enigmatic Talking Heads frontman, appears for an intense version of Psycho Killer. This is the start of one of the best concert films ever made. Director Jonathan Demme, who later won an Oscar for Silence of the Lambs, found the perfect balance between a classical concert recording and immersive performance art. Following Spike Lee’s new concert film about David Byrne, Docville is happy to bring Stop Making Sense back to the big screen. 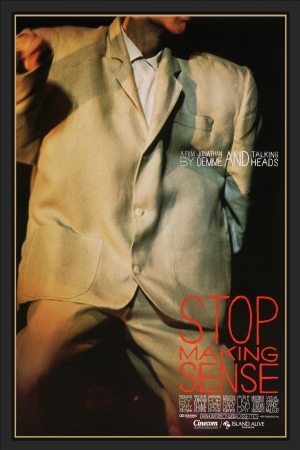 Stop Making Sense was recorded during Talking Heads shows on December 13, 14, 15 and 16, 1983, at the height of their fame. Director Jonathan Demme rewrote the rules of the concert film with his inventive montage of four live shows into one overwhelming film. Just as the music group struck the perfect balance between popularity and whimsy, Jonathan Demme created a perfect combination of concert recording and performance art. After the opening track Psycho Killer, performed solo by David Byrne, more band members join with each song and the concert builds up into an overwhelming experience. During Burning Down the House, Byrne's mesmerizing stage presence, backed by the entire group, provides one of the most awe-inspiring concert moments ever recorded. An unmissable immersion in the unique universe of Talking Heads, for decade-long fans as well as for new admirers who want to get to know these idiosyncratic, slightly hysterical, but above all extremely good songs.