A € 500,000 engagement ring, bulletproof bras and especially her 3000 pairs of shoes made Imelda Marcos world famous. After years of exile, she is allowed to return to the Philippines, where she is still firmly in control and determined to breathe new life into the Marcos dynasty. A fascinating portrait of a power-hungry woman who is well aware that perception is more important than the truth. 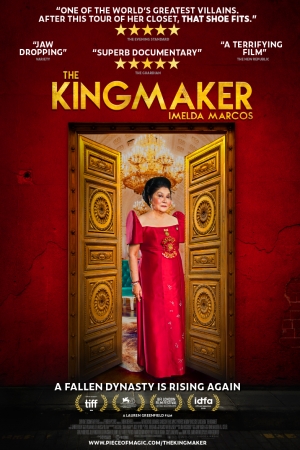 The extravagant world of former first lady of the Philippines Imelda Marcos, widow of Ferdinand Marcos, is perfect for award-winning filmmaker and photographer Lauren Greenfield, who previously immersed herself in the world of the super rich in Generation Wealth (2018) and Queen of Versailles (2012). Money goes hand in hand with power. She shows how Marcos literally distributes money to the poor, who in the past, when she and her husband were in power, "fared so much better than now." She shamelessly rewrites history, presenting herself as "mother of the people". At the same time, she enjoys the billions she collected at the expense of the population she claims to serve. With the help of current President Rodrigo Duterte, she wants to take a final shot at power through her son, Bongbong Marcos.