At the age of 83, Sergio finds a fantastic job: he is hired as a private investigator to go undercover in a retirement home. His client? A concerned daughter who suspects her mother is being treated badly in the home. Equipped with technical espionage gadgets, gentle Sergio tries to gather information behind the scenes in an inventive way. This heartwarming, dryly funny detective story is a tender and subtle testimony to friendship and loneliness in old age. 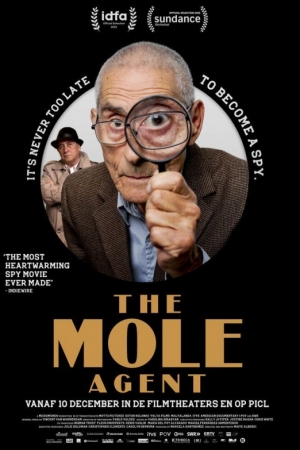 A concerned daughter worried about the care her mother is receiving in a retirement home calls in a private investigator. He sees only one way to find out the truth: someone has to infiltrate the home undercover. He posts a vacancy and ends up with the friendly Sergio, who could use some distraction after the passing of his wife. But Sergio is not a seasoned 007 and has difficulty reporting via contemporary technologies and espionage techniques. Fortunately, he is a good listener and grows ever closer to several residents of the retirement home. His espionage mission also becomes an intimate but penetrating testimony to love and loneliness in old age. A wonderful documentary that strikes an unexpected balance between absurdism and tenderness.