The Mystery of the Pink FlamingoJavier Polo Gandía

What is the deal with pink flamingos? They pop up everywhere as the ultimate symbol of happy kitsch. In this playful mockumentary, determined sound engineer Rigo Pex explores the deeper meaning of this iconic symbol, in a film as colorful and quirky as the flamboyant pink bird itself. 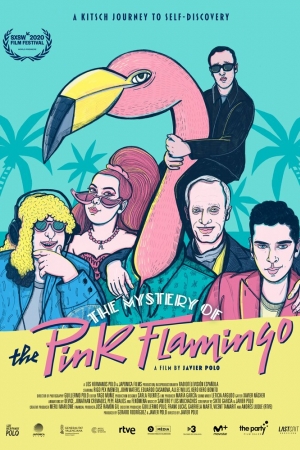 Everywhere he goes, sound engineer Rigo Pex - who consistently dresses in all black - is confronted with images of pink flamingos. When he is at the beach, he sees young people bob around in cheerful pink swimming floats in the shape of a flamingo, in the park he spots people wearing clothes with a flamingo pattern … There is no escape, they are everywhere. Slightly frustrated, he investigates the deeper meaning of the large pink bird. He talks to very different people; from passionate enthusiasts with an obsession with all things pink to the founder of a Facebook group established from a deep dislike for the flamingo. In his eager attempt to unravel this sociocultural phenomenon, he presents unexpectedly fascinating conclusions. In a style that is fully in keeping with the flamboyant subject, director Javier Polo explores the impact of the pink bird as a symbol of the freedom to love what you want without shame.