The Painter and the ThiefBenjamin Ree

Sometimes reality beats fiction: this is the improbable story of an artist who goes in search of the thief who stole her paintings. She manages to track him down and their meeting takes more than one unexpected turn. Director Benjamin Ree won the prize for "creative storytelling" at the renowned Sundance Film Festival. 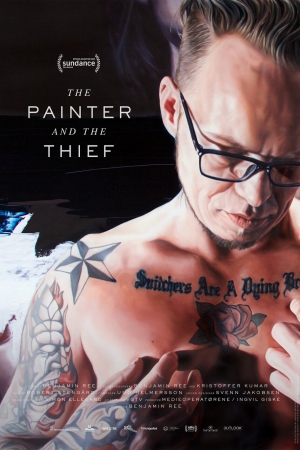 Oslo, 2015. Two paintings by Barbora Kysilkova are stolen from a gallery. The thieves are caught fairly quickly, but there is no trace of the artworks. Hoping to find her creations, Kysilkova visits one of the thieves at his court trial. She asks him if he wants to sit for a portrait. Karl-Bertil Nordland agrees, and when the two protagonists in this story get to know each other better, they also recognize parts of themselves in the other. Benjamin Ree captures the beginning of their connection in an emotional - but never sentimental - documentary. With this double portrait, he became the first Norwegian director screened at the renowned Sundance Film Festival and immediately won the prize for creative storytelling. Kysilkova turned the theft of her work into art, and Ree does the same with their unlikely friendship.