The Pervert's Guide to IdeologySophie Fiennes

Are ideologies just fantasies that we allow to have a concrete impact on our society? How are they promoted or undermined in large-scale films or other forms of popular culture? In this follow-up to 'The Pervert's Guide to Cinema', Žižek uses his inventive interpretation of film history to reflect on ideologies. A unique speech that is both hilarious and deep. 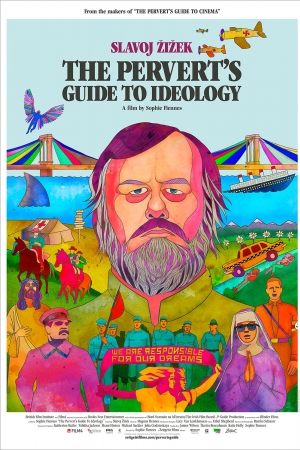 No other sociologist, philosopher, and psychoanalyst would probably get away with donning the costumes of some key characters in cinema history and still saying meaningful things about the collective ideals that shape our beliefs. Through often hilarious reconstructions, he shows how key scenes from major films bear echoes of the great ideological movements of the 20th century. Films such as 'Taxi Driver', 'A Clockwork Orange', 'Full Metal Jacket', 'Jaws', 'West Side Story', 'The Last Temptation of Christ', 'Titanic' and 'The Sound of Music': they are all reviewed and they inspire a captivating and entertaining speech by the Slovenian firecracker with his unique vision of popular culture.