The ultimate portrait of musical hero Frank Zappa (1940-1993), made with an astonishing amount of unseen archive material. A fascinating insight into the private life and work of the enigmatic and socially critical rock star, who left a unique legacy with his 60 albums and social commitment. 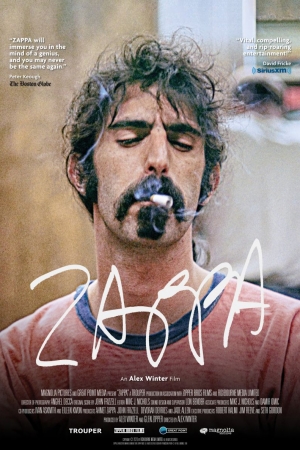 In 2019, director Alex Winter’s compelling investigative documentary The Panama Papers was shown at DOCVILLE. This time he takes a completely different approach with his fascinating portrait of the extraordinary artist Frank Zappa. Zappa's widow gave Winter unlimited access to "the vault": an impressive archive full of images of performances, interviews, personal scenes and animated films. This gigantic amount of footage was digitized thanks to a successful crowdfunding campaign that drew more than 10,000 Zappa fans. These new images are at the heart of a fascinating portrait, interrupted only occasionally by contemporary contributions from Zappa's widow Gail Zappa and artists/musicians such as Mike Keneally, Ian Underwood, Steve Vai, Pamela Des Barres, Bunk Gardner, David Harrington, Scott Thunes, Ruth Underwood, Ray White and others.