A wonderful voyage of discovery through the life and work of the forgotten illustrator Arthur Radebaugh. He caused a furore in the mid-1950s with his beautiful illustrations of a utopian future full of technology. As a matter of fact, his work inspired the festival poster of DOCVILLE. Through interviews and archive footage we search for the man who always had his eye on the future but - paradoxically - fell behind. His tragic journey from progressive spirit to relic of a distant past says something about the fragility of any form of Futurism. 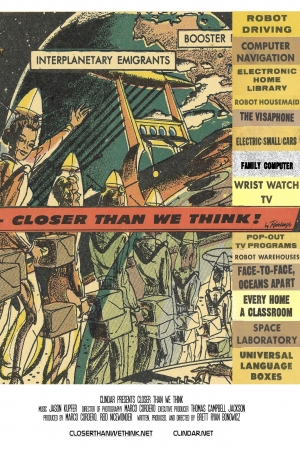 Radebaugh started his career as an illustrator for the car industry in Detroit, but with time artists were increasingly replaced by photographers. Radebaugh threw himself into a new passion and began to illustrate a high-tech future world. His comics full of flying cars, jet packs and futuristic buildings appeared in over 200 newspapers from 1958 to 1963. His detailed drawings represent the optimistic faith in progress of the mid-20th century, a bold belief that technological progress will create a great world in the not-so-distant future. Some of his predictions have become reality, others have become obsolete and mostly an example of his own zeitgeist. The man who always had his eye on the future paradoxically became outdated: both his favorite medium and his vision of the future went out of style. The limited recognition he received melted away, his wife burned his work after his death, and Radebaugh was forgotten. This changed when Director Bonowicz fell under the spell of this mysterious figure and his aesthetic, which now mainly evokes nostalgia instead of a progressive vision of the future.