While alarm bells are being sounded all over the world by climate activists and experts, polluting multinationals and neglectful governments show no sign of actually waking up. Until the day a Dutch lawyer writes world history with the law as a weapon. This thrilling courtroom drama follows Roger Cox as he battles Shell and other major players. He paved the way for a new kind of climate activism. A hopeful and inspiring story that shows how one person can really make a difference. 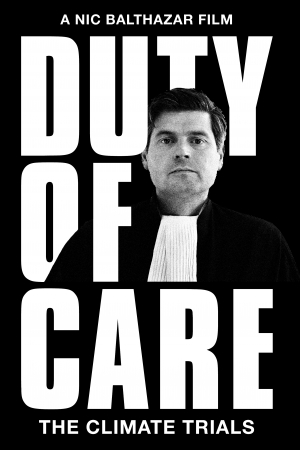 The death toll from pollution is rising. The effects of global warming are being felt all over the world. The UN warns of a 'code red' for humanity. Only ten years remain to tackle climate change successfully. But even the authorities at climate summits seem powerless. Enter Roger Cox. The Dutch climate lawyer who earned a place in the list of Time Magazine's most influential people of 2021. Showing the world how courts can compel polluting multinationals and failing governments to take climate action created a new kind of climate activism. Despite many predicting that he would not succeed, he won his first climate case in 2015 when he successfully sued the Dutch government in a David versus Goliath story. Director Nic Balthazar follows him on his next mission: suing Shell, one of the most polluting gas and oil concerns in the world. His premise: everyone with great responsibility has a duty of care, the duty to give all other earthlings and future generations a right to life, and ignoring this duty of care is an illegal act. He inspired thousands of climate lawsuits and victories all over the world. The law, lawyers and judges may just be the only ones who can save the world in time.