Gunda lives in paradise, for pigs anyway. She spends her days in a cozy shed full of hay, quietly looking outside. The only ones disturbing the peace are her many boisterous piglets. And the occasional one-legged chicken. Acclaimed Russian director Victor Kossakovsky has made an utterly enchanting film. He filmed in black and white, without a voiceover, at eye level of the piglets, offering a wonderfully moving and intimate view of the life of these animals. 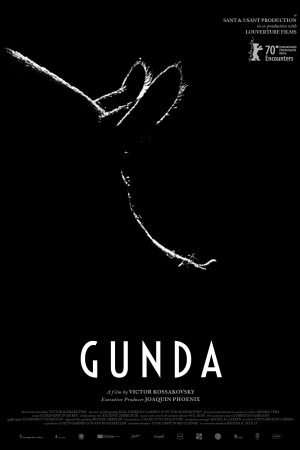 The reviews are unanimous: filmmaker Kossakovsky's passion project is sublime. The visionary director has been a vegetarian since childhood and had been wanting to make this film for a very long time. He manages to let the animals speak for themselves: there is no voice-over with commentary, no text, no soundtrack. Thanks to a special setup of 360° cameras, he was able to film the animals at eye level without disturbing them. The viewer is immersed as if in a warm bath, in an idyllic world without frills where the story tells itself. The incredibly cute piglets grow up next to their imposing mother. In this meditative monument you see the pigs as beings with a soul. And so the film forms an argument that speaks for itself, especially when the inexorable reality at the end of the film disrupts the idyll.