Rivers are the arteries of our planet, they are crucial to our planet and to human history. Over time, rivers have shaped our landscapes and our culture. With extraordinary cinematography and an impressive soundtrack, this film shows rivers from new and unique perspectives. A musical and cinematographic ode to their strength, diversity, transformative capacity and indispensability for us as human beings. 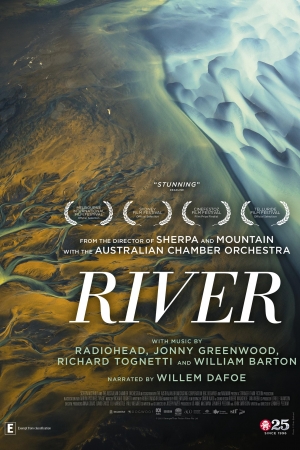 In 2018 Jennifer Peedom was at DOCVILLE with the majestic documentary Mountain, a film that received a huge response worldwide. In the second part of the planned trilogy, she chose an element that is vital to humans: water. More specifically, she focused on rivers, because of their great impact on our existence. A journey through space and time, spread over six continents, with breathtaking cinematography, the narration of Willem Dafoe and an impressive soundtrack, from Bach to Jonny Greenwood and Radiohead.

Outside the Dox is home to a wide array of documentaries that deviate from the classic approach. Colorful films that experiment with form or content, broadening and enriching the genre. There are non-narrative films that immerse viewers in a special universe, be it a cowshed or a Russian subway. There are also very creative films that make you think about bigger issues like capitalism in China or the alarming militarization of the US security forces.