Discover the world of table setting as a competitive sport, an eccentric hobby and statement art. Think of richly decorated tables with (sometimes) controversial messages, a thorough attention to detail, but above all a lot of passion. Misplace a fork, and you can forget the big prize during 'the Olympics of Table Setting' in California. Nine characterful participants take you on an entertaining and surprisingly exciting mix of competitiveness, drama, passion and humor. 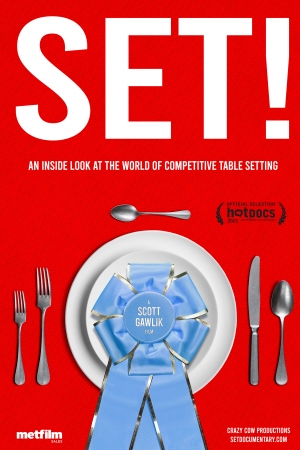 Director and cameraman Scott Gawlik has years of experience filming live events, such as stand-up comedy shows and renowned award ceremonies, and this is evident in his dynamic documentary style that is bursting with spontaneity. He follows nine participants during months of preparation and the final competition day of the annual Orange County Fair competition. One by one colorful personalities with their own motivation, who look back on memories of previous victories and are honest about the reactions of their environment and the impact of the competition on their lives. The jury is also not lacking in enthusiasm. While 'competitive table setting' undoubtedly raises an amused eyebrow, Set! does not set out to mock. On the contrary, the film creates nothing but understanding for this admittedly unconventional passion, which is in no way inferior to other passions.