Every year the international elite travels to Davos for the World Economic Forum. Despite the criticism that it is an elitist gettogether, 81-year-old founder Klaus Schwab firmly believes in his original ambition: the world can improve through dialogue. Filmmaker Marcus Vetter got access behind the scenes for the first time. 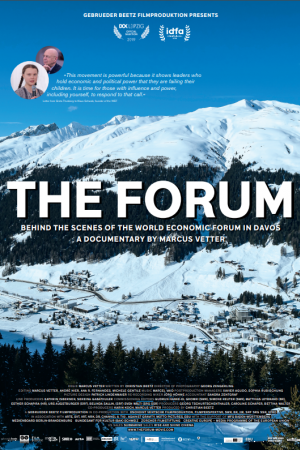 Trump, Macron, May, Bolsinaro ... All major political leaders feature in this controversial documentary. For the first time since the creation of the WEF, filmmaker Marc Vetter records the conversations that take place there. The camera records both panel discussions and one-to-one conversations. Critics argue that this gathering of top politicians, powerful CEOs and other heavyweights ??defending their own interests does nothing more than maintain a status quo. But in addition to the most powerful people on earth, some environmental activists will also be appearing in Switzerland. Jennifer Morgan from Greenpeace and Greta Thunberg enter into dialogue with world leaders. The elderly founder Klaus Schwab still stands behind his credo: dialogue is the only thing that can save the world. An unseen look behind the scenes of this prestigious forum, where economic self-interest is certainly one of the drivers, but where there appears to be more room for open dialogue than you would expect.