The Gig is UpShannon Walsh

Uber, Amazon, Deliveroo, … Millions of people around the world work for the global gig economy managed by multinationals. This industry is worth more than USD 5 trillion and is growing steadily every year. But what is the cost of this? This poignant raising of awareness about flex workers provides a sobering reality check. 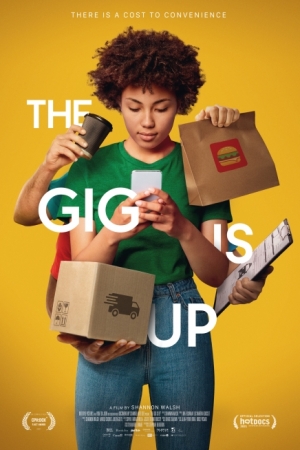 They deliver food, transport people, fill out online surveys or tag images for AI. Gig workers find an income task by task online. Often, they have no other choice. Companies attract them with promises of flexible working hours, independence and self-control. However, the reality is quite different: thankless work with low wages, dangerous working conditions, job loss due to deactivation or negative reviews, no safety net, apps that make it difficult for workers to organize themselves collectively, exploitation and demanding consumers. The lack of regulations perpetuates the problems and governments fail to keep up. The stories of the workers are interspersed with analyses by entrepreneurs, experts and tech journalists. Shannon Walsh kills the illusion of a world where food magically appears at your door at the touch of a button, shedding light on the lives of the people who work in the shadows of this platform capitalism.

The screening on 30.03 is followed by Docville Plus: Plarform economy (in Dutch).