Live to work or work to live? In Japan, employees often seem to have no choice. In a society where labor is central, there is little time left for private or family life. The faceless workers are all too often seen as replaceable cogs in the labor system. In her debut film, artist Pacheco gives the anonymous employee a voice in a special way. 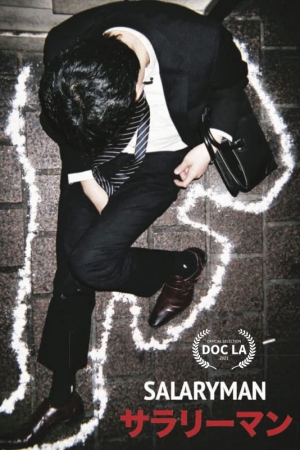 After her own experience of a burnout in New York, Costa Rican photographer and artist, Allegra Pacheco, moved to Tokyo. Here she discovered the eerily normalized phenomenon of the Japanese “salarymen”. These are office workers forced to work many unpaid overtime hours and are then expected to binge drink with their boss until the early hours, missing the last subway and falling asleep on the street, only to repeat this cycle several hours later. Pacheco drew attention to this issue in her art project in which she outlined the exhausted bodies of salarymen with chalk and photographed them as you would at a crime scene. The project grew into her debut film in which she takes a closer look at the Japanese work culture and the consequences of working overtime. What does overtime do to individual lives, families and society as a whole? When life is lost in work, a possible escape seems like an impossible dream. The humor in the many forms of escapism in Japan adds some light to the exhausting, dark reality. Although the film focuses on Japanese society, the insights are universal.

The screening on 27.03 is followed by a Q&A with Dr. Deborah Giustini (Japanese Studies, KU Leuven).